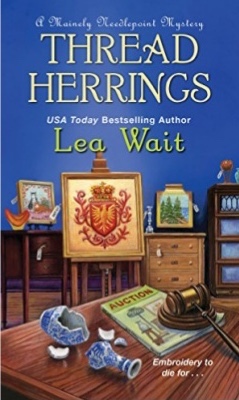 First, I’d like to thank Kensington Books for a complimentary paperback ARC of Thread Herrings. And Tantor Audio, for the free audio download. What a privilege to have both versions to enjoy.

When a tattered, badly damaged coat of arms embroidery piece catches Angela Curtis’s eye while at an antiques auction with her friend and antique shop owner, Sarah Byrne, Angela is determined to own it. In its dilapidated state few people seem interested in it and Angela easily wins it. She’s curious about its origin, particularly because of the piece of paper from a foundling hospital she finds tucked inside. So when she’s presented with an opportunity to find out more about the embroidery and its contents by appearing on television, she accepts the invitation. But when a seemingly harmless investigation into the coat of arms embroidery turns deadly, Angie’s life, as well as her family’s, is soon in terrible danger. Who’s behind the death threats, and why would anyone want her dead over an old piece of embroidery?

Thread Herrings is another keenly plotted cozy mystery in the Mainely Needlepoint series. These stories are always well developed and full of depth, both in plot line and characterization. I always learn something new when I read a book in this series, and I can count on a unique story of a high calibre that will keep me entertained and in suspense. Thread Herrings delivers. Recommended.

Thanks for stopping by. Here are a couple of pictures of my 18.5 year old cat, Kit-Kat. 😊

Have a great day.