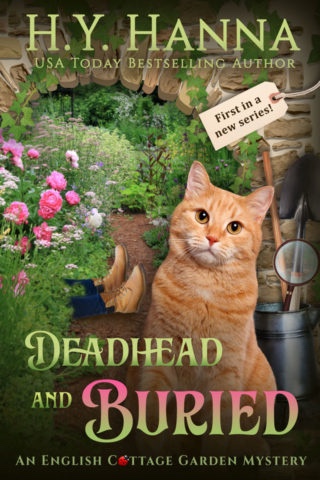 When Poppy inherits Hollyhock Cottage and its adjoining garden from her deceased grandmother whom she never knew, she’s thrilled, albeit a little overwhelmed. Her current situation is that she doesn’t have her own place and she’s low on cash. If that weren’t bad enough, she’s impulsively quit her job after her unreasonable boss made a rude, insensitive comment, leaving Poppy in an even worse financial predicament. Fortunately, this inheritance has come upon her at the right time. However, there are stipulations that go along with taking possession of the property and Poppy feels unsettled about it. The cottage and garden have been neglected for some time and she’s far from having a green thumb. So how can she restore it and bring it back to its former glory? Poppy’s circumstances move her to take a chance on the old cottage and grounds. It’s a huge undertaking, but not more life altering than finding a dead body in the garden.

H.Y. Hanna has delivered another deliciously clever mystery with book 1 of her English Cottage Garden Mysteries series, Deadhead and Buried. I enjoyed this story immensely, having moved swiftly through it. I was caught up in the imagery of the cottage and surrounding garden, as well as the various plants and flowers that were named and described for me to envision. I learned about an exotic flower in this book, which I gained much joy from briefly researching. As is usual with an H.Y. Hanna mystery, the characters were interesting, quirky and fun, and there were pets to enjoy with their lovable antics and unique characteristics.

The audio narrator, Pearl Hewitt, is masterful in portraying both humans and animals. She adds so much delight to an already enjoyable, creative and plausible murder mystery. I highly recommend this book and look forward to the next one in the series.

Thank you, H.Y. Hanna, for a complimentary download of Deadhead and Buried. All thoughts expressed in this review are my own.